this week i worked on a reflection of the process of listening to the radio shows of classmates.

i then redid a website and wrote about it.

i also created a fun little story about all of my daily creates this week.

i also have bellow my daily creates from twitter.

picture it… me in a all black witch outfit, location college building at *#@*#@*@# university, there is paint-candy-music… and the spook, im 11yrs old @ds106dc #tdc2479 pic.twitter.com/mPiXyFDnsX

i unfortunately did not get to doing the web assignments. so i will conclude this weekly summary with some comments and interactions i had with classmates this week. 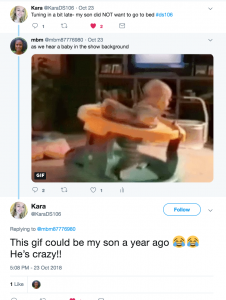 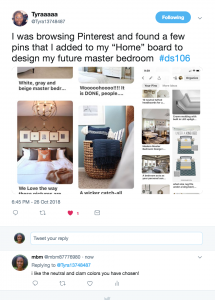 so here, the story goes…

once upon a time there lived a girl name da-da, she was the life of the party, the energy of the room, the light of the sky– if you will. da-da, being the ever so kind individual, decided to host a halloween party for some of her friends. although she needed to turn in her senior thesis that night, she kept putting it off and putting it off. …. UNTIL her procrastination caught up to her. but i’m getting too ahead of myself here.

picture it… me in a all black witch outfit, location college building at *#@*#@*@# university, there is paint-candy-music… and the spook, im 11yrs old @ds106dc #tdc2479 pic.twitter.com/mPiXyFDnsX

da-da even invited her 11yrs old sister. granted she did not want to, but her parents said if she wanted some spending money, she needed to let them have a night to spend with one another, and for her to baby-sit. this became quite interesting since da-da, a college student, living off-campus, with her friends on the night of halloween — is forced to through a party while baby sitting. things were fine enough that day, until it was 12:20am and da-da realizes she did not submit her senior thesis, and all she could do was lay in her bed— confused. how could this have happened? an assignment she had completed a month ago, yet kept waiting to turn in until it “felt right” was now past due???

as da-da doses off just stuned at her own predicament, she dreams that she has woken up 100yrs in the future. she sees herself sleeping, old and calm. and all around her older self’s room are photos and awards and thank you notes and flowers and color… she is stunned. she could not believe, that with all of her hick up in life, … at the end, it was all what was meant to be. 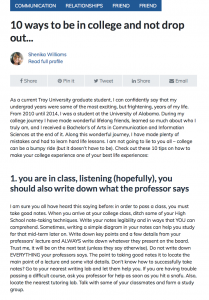 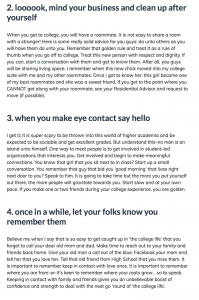 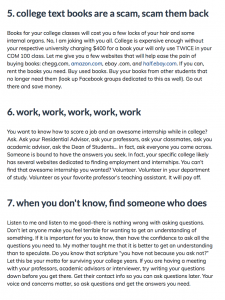 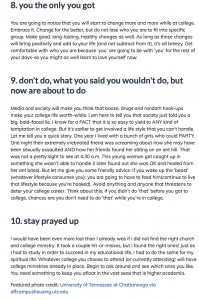 when i first began to think about what part of the web i wanted to remake, i thought of beyonce’s website because that is what i was trying to imitate when i first made my domain. but upon further consideration and taking into account what would be the best way to make something cheeky and yet almost believable i thought to use an article that talks about college students. so i chose an article that was titled “10 ways students can survive college,”  and i changed the title and all of the subtitles to my satirical observations of what the author was trying to get across.

this week we, as a class, listened to one another’s radio projects. my group, the legends, went up first on monday. it was an interesting experience participating in a live broadcasting, just by way of google hangout. then the actual process of listening to content that i participated in making and waiting for folks to react to it through twitter was a new experience that brought its own butterflies and nervousness.

the next day i was able to tune in to listen to the super story tellers. they were a group of interesting and quirky characters whose humor took you through the journey of the show, as you can tell by my tweets i was excited for the group.

while the show was going on and folks were tweeting while their parts were airing, i found it interesting that some of them kept apologizing for how their voice sounded or said they didn’t like how they sounded. this makes me think of how while we could all probably relate to this feeling a little bit, i hope after the great affirmation they were getting from the rest of us, the group in the future is more confident and don’t talk down at the work they have done when it is being presented to people.

i began this week with a cheeky daily create response about spying neighbors… here is the tweet bellow.

i ended this week’s daily creates with great commentary on how humans are not the cutest animals.

being a service animal, of course #tdc2473 #ds106 pic.twitter.com/Q0frgjQkwJ

this week was focused entirely on wrapping up our ds106 radio tracks, and bellow you will find my commentary on how my group and i came to create, “the legends.”

lastly i have added bellow some screenshots of my commenting on my classmate’s work. 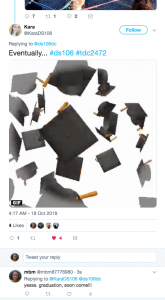 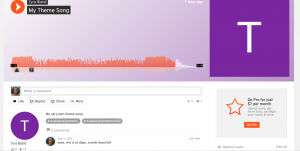 as my group and i come to a close on our radio project i feel really proud of myself. from the initiation of the project i took lead, on creating a group google doc, planning a day to meet in person, following up with folks through email chain, creating a draft outline of the script, and taking on extra tasks (like making extra bumpers and soundcloud track image).

as i mentioned in my progress report of the radio show last week, communication, especially in a timely manner was our biggest hurdle. timeliness, in terms of responding to email and updating google docs, was an issue for us as a whole,  and that is why i suggested we meet in person to write the script. which is what we ended up doing. all but one of us were able to meet on a wednesday at the hcc and begin writing the script. by that thursday night/early friday morning we all uploaded our individually recorded lines. next came the editing and Drake took lead on that. given his experience working professionally in audio editing, he volunteered to chop up our audio and combine it into a final track.

in terms of recording my lines i used my iphone, then chopped it up using garage band, and uploaded it to soundcloud. in addition to reading my lines, i made two bumpers and a commercial for the show. lastly i made the cover art for the track. i used photoshop to incorporate most of the member’s original “the legends” promo, i then used the smudged tool to manipulate the images. lastly, i downloaded it as a jpg and uploaded it to canva to incorporate the text of member’s names because, i did not like the quality of the lettering when i used photoshop. this made me wonder about the functionality of illustrator, and whether or not text comes out in better quality with that program. i shared the final image with Drake through slack and he uploaded to soundcloud.

i feel my radio show group are heading off to fall break on a good footing, read more about our plans so far.

i created a poster to advertise for our radio show and shared it on twitter.

in terms of the audio assignments, i made two that were explicitly for the radio show and one that was not specifically created for the show but can be used as a transitional sound.

make sure to drink your telephone mbm

bellow you will find my daily creates.

but think, if you had to be a Heart Break Process Server?! so like cupid, but not, because u deliver news of relationships ending. u get paid in guaranteed personal happiness, but… are u really happy? #tdc2465 #ds106 pic.twitter.com/RfAHI04Ges

and that children, is how goes the story of "the pumpkin, ghouls, immortals, ben, masks, cat, gremblin—" #ds106 #tdc2464 pic.twitter.com/2bHPgU4f0o

we don't deserve beyoncé gazelle knowles carter, this i believe, i do, i do, i do #tdc2462 #ds106 pic.twitter.com/dTDOBWtoPX

lastly, i am including screen shots of comments i made on classmate’s work. 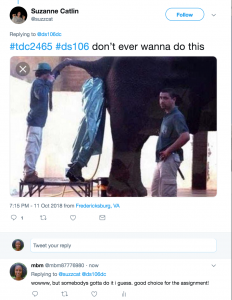 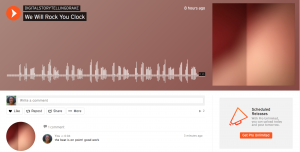 for the coming week, i will be working alongside my group to complete a script for the show and hopefully we will meet the day we come back to school and record the show.

for this assignment i incorporated the things i love to hear most: greetings, words of affirmation, kissing sounds, and laughter.

in terms of how this can be used for our radio show, i think it would be good audience sounds.

for this assignment i took the recognizable sound of someone drinking water and edited it to sound static. i used my iPhone voice memos to record me drinking water, from the umw-logoed bottle that i used as my image. i then used garage band and the telephone-vocal filer to alter the sound of the drinking. while to be honest, i don’t know if the drinking/slurping sound is in itself a recognizable sound. i feel like once someone informs you that it is slurping sound, it hear.

i made a beat using a poping noise with my lips and a snapping noise with my fingers. my group, The Legends, will be doing a talk show for our radio show and i thought this would be an interesting and useful transition sound.

i was thinking in the realm of npr’s radiolab, and how they have these dynamic sounds from one character or prospective to another. so while this beat does not explicitly deal with our theme it does meat the needs of my group’s radio show.

i used my iPhone’s voice memos to record the sounds, then i used soundcloud to chop them up and order them in a sequence that was pleasing to my ear.