above is my video response to the video assignment “tell your character’s story.” i went about this story boarding by thinking about the transient nature of my character mo, and how she is everywhere (as a time-traveling badass) but also a centralized character (as i tell her story from a very specific characterization and perspective). i chose to do a list, and as opposed to typical characterization lists, this one is by mo herself.

i used my iphone to record my audio, i used gargeband to edit the audio, and i used imovie to bring together the images and audio. i made all but one of the images on canva. i also have background music going on which is a looping segment i made of the track whipped cream by ari lenox, which adds a jazz/blues soundtrack to mo’s experiences, which translate to me as experiences of resilience and maturity. what ive learned about storytelling from making this video is that, while articles or videos titled top 10… can often be limiting in creating nuanced understanding of someone, they also for an opportunity to universalize characters which can be useful in videos like mine wherein i am just creating an introduction of the character for folks. 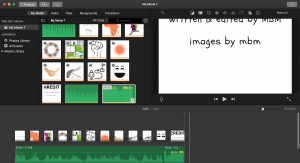